Those who know me well will know, I’m quite (very) tight with money. If I can get a flight a smidge cheaper I’m all for it. As such our return flight from Cambodia offered a mini-break at the end of a holiday – a chance to explore Hong Kong for an evening with a nine and a half hour airport lay-over (for £100 less than the faster alternative!) With time so tight here’s how I would recommend you get the best out of a quick trip to this marvellous city.

With so much of Hong Kong city to explore, as soon as you’re off the airport express train head straight down to the waterfront and get on that big ol’ red bus! Yes, you’ll look like a typical tourist, snapping away as you weave in and out of the metropolis but there’s far too much to see without someone who knows the best bits to visit.

Honestly, it probably would have meant more to me if I’d actually seen the film nonetheless the building itself is still impressive and set along/inside a busy designer filled shopping mall.

It seems like such a menial thing to suggest however when hungry and in Rome (or Hong Kong as the case may be)? It just so happened that the first restaurant we walked in to – Lan Kwai Fong Cart Noodles – was the brand spanking new creation of a former student from the University of Leicester!

After noodles you need pudding, right? The best crepe I have ever had in my life came from an adorable little shop found nestled on Wellington Street. It’s almost worth the 11.5 hour flight to go and visit.

5. Take a wander with no where in mind

It didn’t seem to matter where we were going, around every corner Hong Kong had something worth photographing. Whether that was Merry Christmas lit up on the side of a building, Asian Santa in his grotto or a festival displaying traditional food and dancing I was completely captivated. 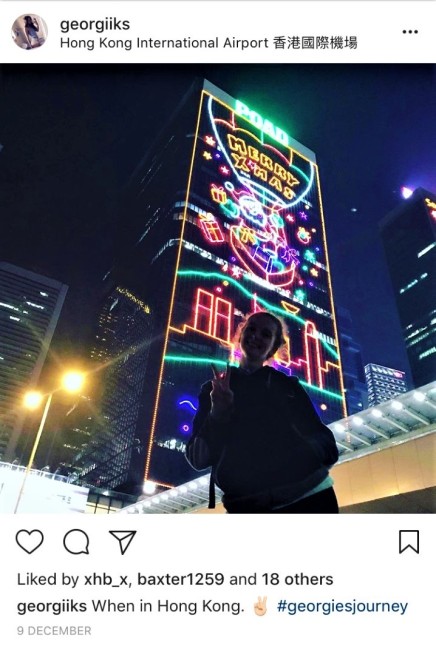 Funnily enough, Hong Kong exuded the festive spirit I felt was missing from New York. The streets were cleaner, the people more merry and the decorations on a bigger and much grander scale. I can’t begin to profess any kind of great knowledge of the city but from the six hours our boots were on the ground in the street I loved it and would suggest it was an overlooked Christmas destination.